Are you a first time gun owner who started with a shotgun?

Or maybe you’re a seasoned collector who just wants to see how others are cleaning their shotguns.

Perhaps you’re a gun enthusiast who has pre-ordered the AA12 semi-automatic shotgun and want to be fully prepared to maintain it when you finally get it.

Regardless of your reason, you’ve found an article to help you learn how to clean the AA12.

Quick Navigation
A Note on Safety for First-Time Gun Owners
What in the World Is an AA12 Anyway?
How to Clean an AA12
Cleaning Kits to Help You Clean Your AA12 Right
Go Forth and Clean Your AA12

A Note on Safety for First-Time Gun Owners

As with any type of gun, you need to practice some safe habits. As the AA12 is a semi-automatic shotgun that can do a lot of harm, we want you to be extra aware of safe practices.

First of all, make sure the AA12 is legal in your area. The last thing you want is trouble with the local authorities.

Make sure all of your documentation like FOID cards and gun registrations are up to date.

You shouldn’t keep a loaded gun in your home, especially if you have children. Store the gun in a special case or safe out of their reach, preferably one that can be locked. Remove the magazine and make sure you have no rounds in the chamber before storing it away.

Remember that the AA12 is a semi-automatic shotgun. This means it can fire a lot of rounds very quickly if you hold the trigger down. Make sure you understand how to operate it before you try to use it.

Practice with your AA12 in an area that has little or no population to disturb. You can also take it to a gun range and get classes from safety instructors and seasoned gun owners.

What in the World Is an AA12 Anyway?

Okay, maybe you stumbled on our article because you looked up how to clean a shotgun or similar set of words.

But we’ve caught your attention, so allow us to give you some information about the specific gun in question – the AA12.

Christopher R. Bartocci wrote a very informative article on the AA12 for the Small Arms Defense Journal for those looking for even more in-depth information, but we’ll highlight some of the more major facts about the AA12 for those who don’t have time for a longer read.

AA12 stands for Atchisson Assault 12 gauge shotgun. The gun was first built in 1972 by a man named Maxwell Atchisson. It started as a fully automatic shotgun and has seen quite a few improvements over the years.

The AA12 has a cyclic rate of 300 rounds per minute and can be fired using a rounded drum magazine that holds 20 or 32 rounds or an 8-round box magazine.

According to Bartocci, the trigger allows for single-shot or automatic firing depending on how you squeeze it. He also praises the low recoil the gun has.

Atchisson designed it to be used for close-quarters combat – a shotgun used for ambushes, room clearing, and in streets or low-visibility areas to clear them of hostiles.

Up until this year, the AA12 was only available to military and law enforcement due to its purpose and for being an automatic shotgun. Now the AA12 is being made available to civilians in a semi-automatic version on armslist.com for preorder at the price of $3000.

A second version that includes a Picatinny rail and optic attached is also available for $3250. It is also a semi-automatic shotgun.

Both AA12 versions are anticipated to be delivered in December of 2018.

How to Clean an AA12

Alright, you’ve got your safety tips and you know a bit about the AA12. You’re ready to see how to clean it – and any semi-automatic shotgun for that matter.

Before we begin, remember that some of the items you use may not be non-toxic, so we recommend reading over the labels carefully.

Wear safety glasses and gloves if necessary, and if you use any sprays, do so in a well-vented area away from kids and pets.

You can’t clean a loaded gun. It just isn’t safe or possible. Make sure you point the gun away from yourself and others. Remove the magazine and check to make sure there are no rounds in the chamber.

This step can be broken down into further steps depending on the type of shotgun you have. Some guides recommend starting with the barrel for disassembly, but it really will depend on type.

Break down your gun into its main components. For semi-automatics, break everything down so you can clean all of the individual pieces that make it work.

First, wipe everything down with a non-lint cloth. A lot of gun owners use aerosol degreasers for this step, although it’s not a requirement by any means. The main areas of concern here are the barrel, choke-tubes, and anywhere that metal slides against metal.

A guide by Curtis Niedermier of Outdoor Life recommends you do not spray any parts that have springs or small pieces, as this could cause them to shift out of place and damage your AA12.

Swab and Scrub Your Parts

Start with cleaning out the barrel of your AA12. There are specialty brushes you can pick up for this purpose – and we’ll show you a few kits with these in them later.

Be cautious that your brush doesn’t catch on any small parts and pull them out of place while you clean.

Once the barrel is good to go, you can move on to the chokes and threads. Niedermier doesn’t think it necessary to soak the chokes, but you can do so to be on the safe side. Use brushes and rags to clean these parts and then put them back together. Niedermier recommends putting a tiny bit of grease on the chokes before reassembly.

Niedermier also warns against cleaning the action of your AA12 too often because if you miss cleaning out any oil or cleaning liquids, you risk build-up of dirt and dust that can cause damage to your gun.

Use lint-free rags, cotton swabs, and your brushes to clean the action up. If you feel the need, use a little oil or lubricant for the moving parts of the action.

You’re almost done cleaning your AA12. Now is the time for a final inspection of the gun. Look everything over and wipe the parts down with a lint-free rag. Apply a little oil to your exterior pieces and tighten up any screws or pieces of hardware.

Reassemble your AA12 and test it to make sure everything moves and works as it should before you take it out shooting again. If all seems well, you’ve successfully cleaned your AA12.

Cleaning Kits to Help You Clean Your AA12 Right

Before you go, we have a few cleaning kits we’d like to show you to help you properly care for your AA12.

The first is the Hoppe's Universal Gun Cleaning Accessory Kit. This one is great because it is very reasonably priced and it comes with many of the brushes and tools you need to clean any gun, not just your AA12.

The downside, however, is that you have to purchase your cleaning solvents, oils, and the like separately. But with the cheaper cost, you’ll have plenty of extra cash to do so and you can choose your preferred brand.

Another kit to consider is the DAC Winchester Super Deluxe Soft Sided Gun Care Case. Although pricier than the Hoppe’s Universal kit, the Winchester kit comes with even more cleaning tools. 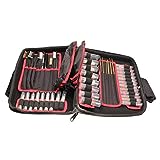 It doesn’t come with cleaning solvents or the like, but you’ll probably not need another tool kit regardless of the types of guns you own.

But if you want a kit where you don’t need to buy all of your cleaning solutions or oils separately, the Hoppe's Elite EGCOTG Gun Care On The Go Kit not only comes with cleaning solutions, oil, and your cleaning tools but also a neat little case that is perfect for on the go. Hunters and campers can go out into the wilderness and know they’ll have what they need to properly clean their guns.

The Hoppe’s Elite EGCOTG kit is a little more expensive, but it comes with everything you need plus the travel case. You won’t need to shop around for a while with this one.

Go Forth and Clean Your AA12

With our guide in mind, you can now successfully clean your AA12. You also have some good cleaning kits to look into, as we know you’d rather spend your time operating your AA12 rather than shopping around.

If you’re a civilian who had to preorder your semi-automatic AA12, you can now relax a little knowing that when it does finally arrive, you’ll be ready with a cleaning kit and the knowledge of how to clean it.

And that means less time researching and more time enjoying your AA12.

As an Amazon Associate, this site earns from qualifying purchases. We may also earn small commissions on purchases from other retail websites.

The 10mm handgun has been going strong for over thirty years now, and it’s not hard to understand why many enthusiasts gravitate towards this caliber. While the popularity of the 10mm pistol manufacturers has risen and fallen over the years, the caliber has been enjoying a resurgence as of late. Now, several gun owners are […]

The best semi auto shotgun may not be as reliable as a pump shotgun, but it is safe enough to serve a homeowner who needs to defend their family and their property. In addition, it can be an excellent choice for a sports person who needs to hunt or just shoot targets. These auto shotguns […]